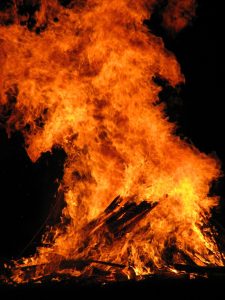 According to Boyden Fire Chief Chris Starkenburg, about 11:28 p.m., the Boyden Fire Department was called to the report of a barn fully engulfed near 320th and Lily Avenue, four miles east of Boyden or three miles west of Sheldon.

The chief says the fire department saw both the barn and the corn crib fully engulfed, with a good portion of the grove on fire as well as they approached the scene. He says the fire was difficult to attack, due to an overgrowth of trees. He says it was an abandoned farm place. According to the chief, they had to close Lily Ave so they had a place to put drop tanks. He says they put the tanks on the road and pumped from there.

Starkenburg says no injuries were reported.

He says the cause of the fire is undetermined.

Chief Starkenburg reports that both buildings were totaled.

He says the firefighters who responded were on the scene for about four hours.

Fire Chief Denny Vander Wel says it was a larger lawn and garden shed, which was basically destroyed by the time they got there. He says embers from a burning pit get the blame for the blaze. He says the wind was strong that day and accelerated the fire. He says they cooled down some hot spots and then due to the high winds that were forecast, they sprayed copious amounts of water on the burning pit. He says they were out about 40 minutes.
Vander Wel says Orange City firefighters were also called out on Saturday, May 14th to put out a fence line full of corn stalks on fire. He says that page, to a place two and a half miles south of Orange City on K64, went out about 12:30 p.m., and they were there for about an hour and a half.