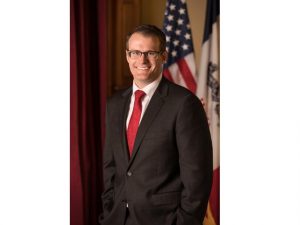 Northwest Iowa — Iowa’s Lieutenant Governor is going to be in our area this Wednesday.

According to Lieutenant Governor Adam Gregg’s staff, the Hawarden native will attend Leadership Sioux Center’s Graduation exercises at the Terrace View Event Center in Sioux Center at noon. The event center is at 230 Saint Andrews Way in Sioux Center.

According to the Sioux Center Chamber of Commerce, Leadership Sioux Center is an educational program intended for Sioux Center area citizens who have an interest in their community, their leaders and institutions, and specific leadership opportunities available in Sioux Center.

During the program, which is spaced over eight months, participants build a leadership network among current and emerging leaders, learn about community issues, and become familiar with the rewards of serving one’s community.

The Lieutenant Governor’s staff also tells us that Gregg will be visiting C-S Agrow Services in Calumet this Wednesday as well. The business is located at 106 South First Street in Calumet and the appearance is scheduled for 2:00 p.m. C-S Agrow is a builder and servicer of grain bins. They tell us they have been the largest GSI dealer in the state of Iowa for 10 out of the last 14 years.