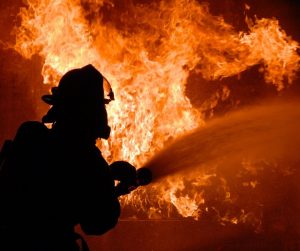 Alton, Iowa — A bar and grill was damaged in a fire early on Tuesday, May 10, 2022, in Alton and four fire departments fought the blaze.

According to Alton Fire Assistant Chief Kevin Langel, at about 3:45 a.m., the Alton Fire Department was called to a report of The Yard Bar And Grill being on fire at 211 East 10th Street, a half a block east of Old Highway 60 in Alton.

The chief says the fire department saw the back side of the building engulfed in flames, with lots of smoke downtown as they approached the scene. He says they started with an interior attack. Since the back was on fire, they went through the front door and found the main part of the bar was not on fire. At the same time, another crew of firefighters attacked the fire in the back from the outside.

He says the cause of the fire is undetermined, but they suspect that it may have had something to do with an electrical box outside of the building.

Assistant Chief Langel reports that there was major damage to the rear, but the main part of the bar only sustained smoke and water damage.

He says the firefighters who responded were on the scene for over three hours.