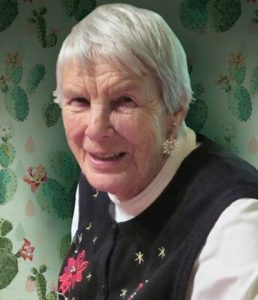 Susan B. Willer of Cave Creek, AZ, formerly of Alton passed away peacefully in her home on February 16, 2022. She was 95.

Friends and family will remember her boundless generosity, intellectual and artistic passions as well as her sincere commitment to helping others. She loved the outdoors and cherished watching the Arizona sunsets from her deck. Susan was very active in the Cave Creek community as a volunteer in the town’s museum, library and pre-school. As a member of the Guild at Our Lady of Joy in Carefree, she pursued her spiritual development and contributed to the needs of the Parish. Susan’s love for music was satisfied by singing in local choirs and afternoons with the New York Metropolitan Opera radio broadcasts. Mrs. Susan Willer was raised in Alton, Iowa and attended Iowa State College where she was honored as a “Bomb Beauty” in the 1947 yearbook. On a trip home from college, she met Robert R. Van Nimwegen (1924-2014) who was also from Alton. They married and moved to Los Angeles where they both worked in the aviation industry and in 1949 began a family. In 1955, they moved to Phoenix. She and Robert divorced in 1967 and are survived by five children, Rodney, Mary (Schaefer), Robert Jr., William and Glen, as well as ten grandchildren and five great grandchildren. Susan graduated with honors from Arizona State University (BA Education) in 1970 and began a long career at Salt River Project in their accounting department. She met Carefree Pharmacy owner Wayne Willer (1924-2011) and remarried in 1975. Susan sold her home in Phoenix and moved to Cave Creek. She and Wayne are survived by his children, Jeff, Rick, Rob and Lori (Haye), eleven grandchildren and four great grandchildren. Wayne’s son Randy passed in 2003.