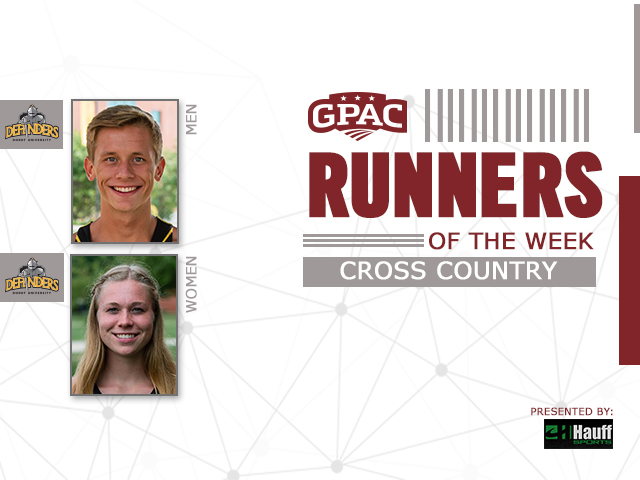 Jessica Kampman of Dordt University is this week’s GPAC/Hauff Mid-America Sports Women’s Cross Country Runner-of-the-Week. Kampman, a junior from Abbotsford, British Columbia, was the top NAIA runner at the Roy Griak Invite held last weekend in Minneapolis, Minnesota. In a race that featured 30 teams and several from NCAA Division II and Division III, Kampman placed 38th overall with a 6K time of 23:44. She has been the top NAIA runner in each of her teams three meets this fall. Dordt placed 11th as a team, the top NAIA finisher in the field.

Eric Steiger of Dordt University is the GPAC/Hauff Mid-America Sports Men’s Cross Country Runner-of-the-Week. Steiger, a senior from Lynden, Washington, was the top Dordt runner at the Roy Griak Invite, a meet held at the Les Bolstad Golf course in Minneapolis, Minnesota. In a race that featured 29 teams and 374 runners and several from NCAA Division II and Division III, Steiger placed 25th overall with an 8K time of 26:12. He was the fourth NAIA runner to cross the finish line. Dordt finished seventh as a team, its best ever finish at the Griak, and was second to No.1 Indiana Wesleyan among NAIA teams.