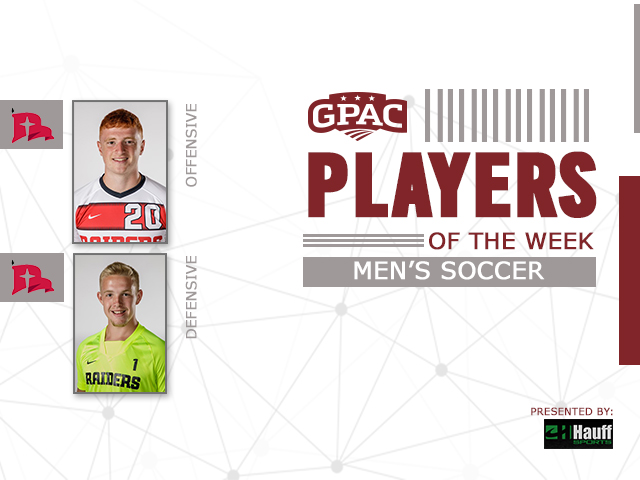 James Bolger of Northwestern College is this week’s GPAC/Hauff Mid-America Sports Men’s Soccer Offensive Player-of-the-Week. Bolger, a junior, from Boyle, Republic of Ireland, netted the game-winning goal against No. 22 Morningside with less than 10 seconds remaining in overtime. The win marked the first win for the Raiders over a nationally-ranked team at home since 2012, and helped the Raiders stay unbeaten in GPAC play. He tallied two shots in the two Raider victories this week.

Ezekiel Foltz of Northwestern is this week’s GPAC/Hauff Mid-America Sports Men’s Soccer Defensive Player-of-the-Week. Foltz, a junior, from Sioux Center, Iowa, helped the Raiders start 3-0 in league play, the best start since 2018, as the Raiders downed No. 2 Morningside and Concordia last week. The win over the Mustangs marked the first win over a nationally-ranked opponent at home since 2012. He collected 11 more saves with a save percentage of .917. The shutout over the Bulldogs was his fifth of the season for Northwestern.