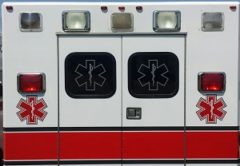 Alton, Iowa — A Denison woman was airlifted to a Sioux City hospital in the aftermath of a fiery crash near Alton early Thursday evening.

According to the Sioux County Sheriff’s Office, about 5:20 Thursday evening they were called to investigate a motor vehicle accident that occurred on Highway 60, one mile north of Alton.

According to authorities, 38-year-old Michael Nelson, of Crescent, Iowa, was driving a 2021 Peterbilt semi-truck pulling a cattle trailer northbound on Highway 60. Deputies say he slowed to turn east onto 440th Street, when a 2005 Dodge Grand Caravan, driven by 37-year-old Kayleen Stallman, of Denison, struck Nelson’s trailer. Deputies say the minivan caught fire after the collision, with Stallman trapped inside. She was freed from the vehicle by another motorist, according to authorities and transported by the Alton Ambulance to Orange City Area Health before being airlifted to MercyOne Medical Center in Sioux City.

Deputies say the cattle trailer sustained approximately $20,000 in damage. Damage to the minivan was estimated at $10,000.

Stallman was reportedly cited for following to close and operating a motor vehicle with a suspended driver’s license.