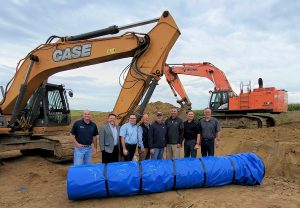 Lebanon, Iowa (western Sioux County) — A milestone was reached in northwest Iowa this week in the construction of the Lewis & Clark Regional Water System. Troy Larson, the project’s executive director, says the final section of pipe between Beresford, South Dakota, and Sioux Center was laid this week.

Larson says there’s still a lot of work to do before water is flowing through that pipe.

Larson says they still have a few more member cities to bring online.

Larson tells us about the line connecting Hull and Sheldon.

He tells us that while Sheldon getting water is a few years away yet, they are getting things ready in the Sheldon area.

For clarification purposes, water going to Sibley will come off of the Worthington branch, which is separate from the Sheldon branch.

Larson says they are also watching the U.S. House of Representatives closely, as the infrastructure bill that they are considering contains the remaining federal funding that Lewis & Clark needs to complete the base system — $132 million.

First developed in 1989, the water system is a partnership of cities and rural water districts in Iowa, Minnesota, and South Dakota. It uses some 340 miles of underground pipe to move treated water to communities from wells near the Missouri River, south of Vermillion, South Dakota.