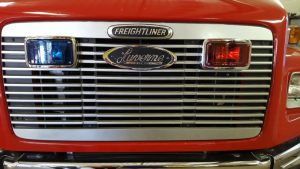 According to Hospers Fire Chief Jason Overmole, about 6:00 p.m., the Hospers Fire Department was called to the report of a corn crib fire at 4288 380th, two miles west of Hospers and two north.

The chief says the fire department saw a small portion of the corncrib’s roof on fire as they approached the scene. He says they sprayed some water on the roof and then sent guys up into the rafters to make sure it was out. They also used thermal imaging cameras to look for any hot spots to prevent overnight flareups.

Overmole says no injuries were reported. He says the Granville Fire Department automatically gets paged to structure fires in Hospers’ district, so they helped as well.

He says sparks from a yard waste burning pile were carried on the wind and deposited on the roof of the corn crib, which started the fire.

Chief Overmole reports that there was minimal damage. He says the structure seems to be sound.

He says the firefighters who responded were on the scene for about an hour.