Dyersville, Iowa — Tickets to next week’s Major League Baseball game at the Field of Dreams site in Dyersville are a hot commodity.

Some Iowans have found out they were chosen in a drawing for tickets. Nikki Glatt of Dubuque is one of them. 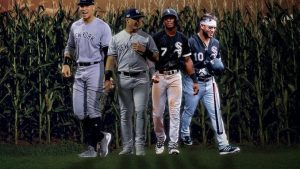 Iowa residents had from July 16th through the 23rd to enter a lottery drawing for a chance to purchase tickets for the highly-anticipated game between the New York Yankees and the Chicago White Sox. They’ll be playing in Iowa’s first Major League Baseball game under the lights in the newly-constructed stadium near the Field of Dreams Movie Site next Thursday night, August 12th. Glatt had an appointment to try to purchase tickets at 11 a-m – and was able to get two tickets for 375 dollars each. She says she’s had a lot of people reaching out to her willing to buy them – even though it appears tickets are non-transferable.

Eight-thousand fans will be at the game itself – and the Dyersville Chamber says Major League Baseball isn’t even sure how many people will be coming to Dyersville for the event or the “Beyond the Game” two-day festival that the community will be hosting next Wednesday and Thursday. Glatt says she’s not looking forward to the crowds, but she is excited for the game itself – even though she’s a Braves fan.

The Field of Dreams game between the Yankees and the White Sox will be aired live on FOX next Thursday night, August 12th at 6 p-m, with an official MLB viewing party at the “Beyond the Game” Festival in Dyersville’s City Square. For more information on the “Beyond the Game” festivities, check out beyondthegameiowa.com/schedule [4].