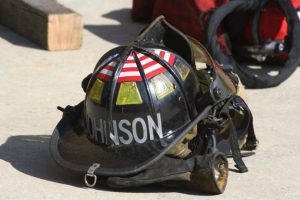 Boyden, Iowa — The Boyden Fire Department has been kept busy recently. They responded to a house fire early on Thursday, July 29, 2021. Fire Chief Chris Starkenburg tells us they were called back there on Friday morning for smoke coming from the roof. Then, another house was destroyed in a fire in Boyden on Monday, August 2, 2021.

According to Boyden Fire Captain Angie Paulsen, about 9:05 a.m., the Boyden Fire Department was called to the report of a house fire at 605 Pleasant Street in Boyden.

The captain says the fire department saw flames coming from the porch roof and out of a bedroom window as they approached the scene. She says they used an exterior attack with hoses and a deck gun to fight the fire.

Captain Paulsen says no injuries were reported, and the house was vacant at the time of the fire.

The fire department was assisted by Hull and Sheldon firefighters.

She says the cause of the fire is undetermined at this time, and an officer from the State Fire Marshal’s office was investigating on Monday afternoon.

Captain Paulsen reports that the home will be a total loss.

We also talked to Inwood Fire Chief Troy Van Beek about a small fire last week. He says someone was welding on a combine and sparks got into the elevator of the combine where there are rubber paddles that move the grain, and these started on fire. Van Beek says the damage was minimal, thanks in part to the use of a fire extinguisher by the person who had been doing the welding. He says fire extinguishers are very valuable to help limit the extent of a fire in the early stages just after it gets started. He advises keeping one handy at all times.