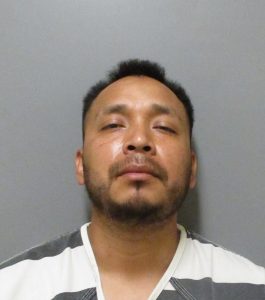 Maurice, Iowa — A traffic stop for a speeding violation led to the felony arrest of a Sioux City man Saturday afternoon just south of Maurice.

According to court records, a Sioux County Deputy pulled over a Chevrolet pickup for speeding at the intersection of Highway 75 and 480th Street about 1:30 Saturday afternoon. The truck’s driver, 33-year-old Gerardo Morales-Ramirez, of Sioux City reportedly had bloodshot eyes and had an odor of alcohol emanating from his breath at the time of the traffic stoop. Deputies say Morales-Ramirez failed standardized field sobriety tests and was placed under arrest for OWI.

According to authorities, Morales-Ramirez had been convicted twice before of Operating While Impaired, making this arrest his third, which elevates it to a Class D Felony. In addition, further investigation revealed that Morales-Ramirez was wanted on an outstanding arrest warrant from another county. He was also charged with Driving While License Revoked, in addition to the OWI and the original speeding charge.

He was booked into the Sioux County Jail on those charges. As of mid-afternoon Monday, online jail records indicate that he was still being held in lieu of bail.